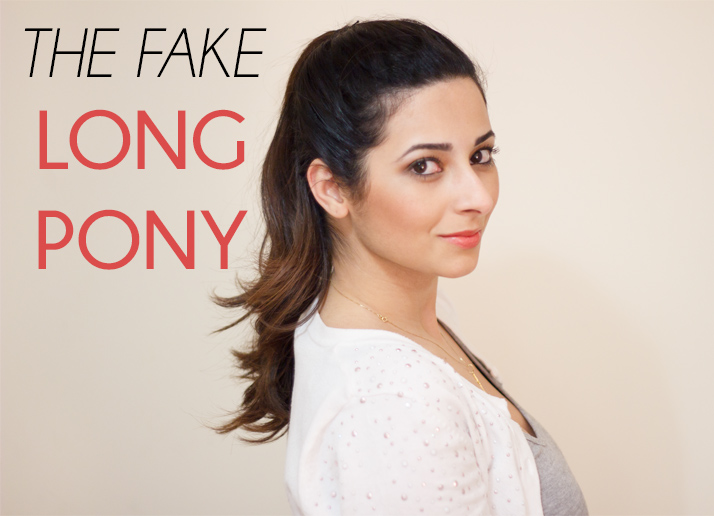 Since having my hair cut, I occasionally miss having really long hair. Not to say I regret having it cut, but you always want what you can’t have, right? And I miss it the most when I wear my hair up in a ponytail, so today I have a little trick to show you that will pretty much double the length of your ponytail, using only hairbands and hair grips (or bobby pins)! That’s right, no hair extensions – it’s all an illusion! I wanted to make this really visual, so I’ll keep the description of the steps short at the bottom of the post. If you have any questions, feel free to ask them in the comments – enjoy! :)

Basically you’re creating 3 ponytails in succession; highest pony is the main pony and the only one that should be seen, the lowest pony will give you the extra length, and the middle pony joins both of them together, which gives the impression that there’s only 1 really long ponytail there.

Section all the hair from your temples upwards and tie it in a high ponytail; that will be your first and highest pony (Step 1). Then move that pony out of the way (Step 2) and separate a small chunk of hair in front of your ears on each side (Step 3). Gather whatever is left in a really low ponytail (Step 4); the lower this pony, the longer your fake ponytail will be. Separate a small section of hair from the bottom of the top ponytail and from the top of the bottom ponytail (Step 5), and join them together in the middle, creating the third pony (Step 6); tighten the middle pony a little by pulling the sections of hair apart for a more streamlined overall look. Bring the top ponytail down and use the two chunks of hair in front of your ears (Step 7) to hide the evidence of a middle ponytail by pinning them to the sides (Steps 8, 9 & 10). And you’re done! 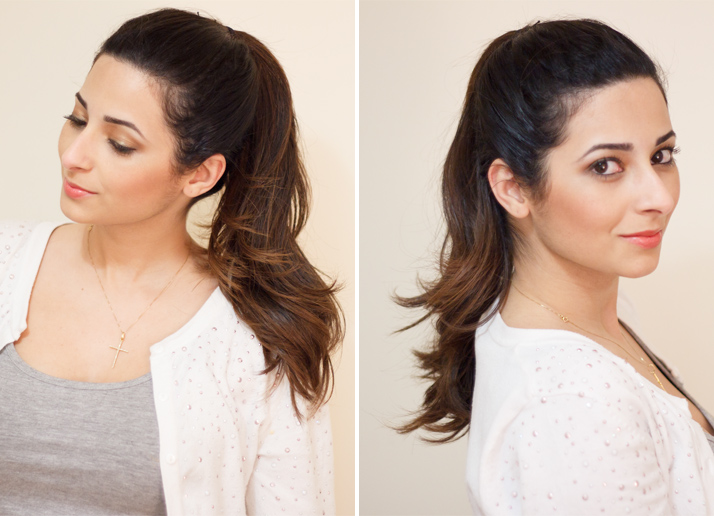 How simple was that? I absolutely love this little trick and it definitely helps with the long hair nostalgia! If you curl the ends of you hair, it will help all the ponytails blend in better and it will give you a bit more volume!

I hope you liked this tutorial, and if you did, make sure to subscribe to my blog to see a brand new blog post every Monday, Tuesday, Thursday & Friday and a new video every Wednesday & Sunday. Next week the videos will be going up on Monday & Wednesday instead, as I have a couple of very special Valentines Day videos prepared for you :)

HOW TO: Flawless Face With Luxury Makeup (+ Budget Alternatives)